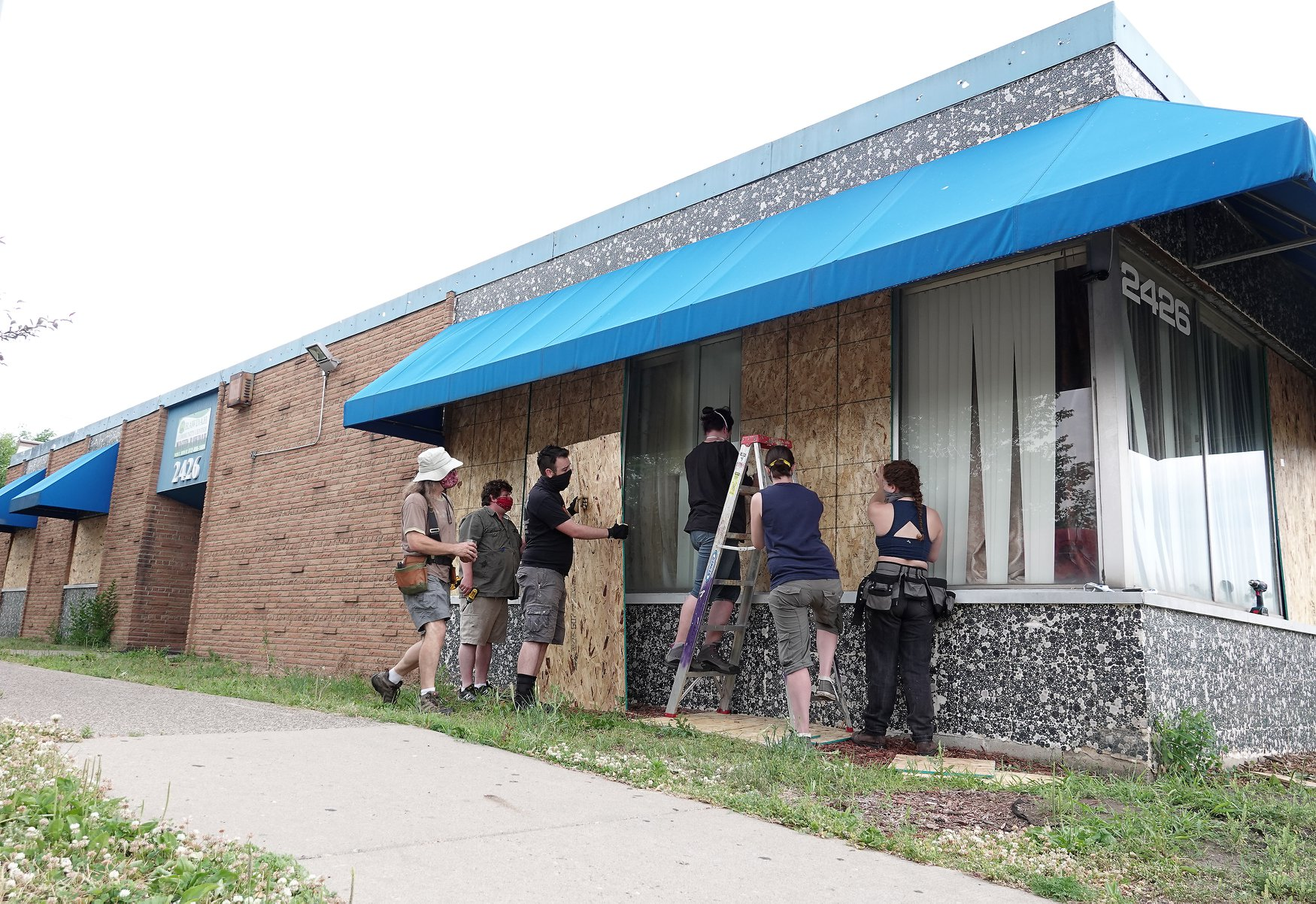 I remember March 13th well.  We had a final preview that night. We showed up to the theater at around 1 PM to tech a few sequences, get things just right for that night. We showed up just in time for the governor’s press conference, where he announced a ban on all gatherings over 10 people. Immediately, someone from the front office came into the theater and announced what we all knew- the run was canceled. The whole production was on the quivering brink of entering fully and triumphantly into creation, and in that moment we simply….stood down. We all sat in the house processing, and I checked my phone every few minutes, watching a months worth of work wilt and die on the vine as emails trickled their way into my inbox. My first taste of what would become a familiar sensation.
I start the story there because it is worth noting that, as we have often discussed amongst ourselves, none of us who worked with University Rebuild could have done what we did if COVID hadn’t shut down the industry. There are lessons to be learned and discussions to be had about that, but those are for another time.
Several months after the industry shut down, the Minneapolis police callously murdered a black man in my city, another chapter in a long history of killing and abuse. This time, it was caught, clearly and heart-wrenchingly, on video. The city convulsed, and there was an uprising. And in the middle of it, the technicians and designers of the Twin Cities began to come out in ones and twos and set to work; coalescing around a friend and peer and production manager who sent out a Facebook call to start boarding up businesses with plywood sheets that lay unused in darkened theaters.
At some point, early in my career as an electrician, someone gave me the advice “move to help.” If you see something that needs extra hands on a call, move to that. Don’t always wait to be told that help is needed. Go to where you see a need, and stand ready to do whatever is asked of you. That ability to move towards what needs help is an essential skill for us. It is fundamental to working in a collaborative art form. My most enjoyable experiences working in theater have come in environments where the focus was the collective goal. And after three months of existential career doubt, drifting aimlessly through my house like a somnambulant ghost, listlessly picking up items at random and wondering what to do with my time, there was something regenerative in seeing my community come out and demonstrate their ability to work as a collaborative whole.
Like I said, it began with a few of us, and quickly grew. We were mostly out-of-work or furloughed designers and technicians. We had tools, we had lumber, we had skills. We set to work boarding up small businesses to protect them from the chaos that reemerged each night. On the one hand, it seemed like a very inconsequential thing to be doing. There were hundreds of people in our city doing so many acts of service- street medics, mutual aid coordinators, front line protestors- that our tiny acts of putting up plywood seem insignificant.
But I think what we knew, as technicians and designers, is that the seemingly insignificant details matter. The fabric of a character’s dress means something. The direction the door on the set swings can make or break a transition. The slot you put the gel in can keep the color from burning. A theatrical production is a towering, teetering pile of details. Success is measured by our ability to build that tower, one brick- one tiny detail- at a time.
The first day, there was very little structure. We rushed haphazardly from place to place, helping where we could. And that could have been the pattern that continued. But one thing that technicians and designers excel at is building ephemeral systems in the midst of chaos. It is constantly demanded of us, as each new production brings new challenges and hurdles. We are highly- perhaps uniquely- qualified to work quickly, efficiently, and effectively in the midst of mayhem. By the end of the first day, we had built a loose structure out of the turmoil. And that night, after curfew, with the sound of helicopters in the background and with hundreds of people still out in the streets, with our skyline lit by fires, we had our first production meeting as University Rebuild.
Again, because of our jobs, we understood the significance of the meaning that lay beneath. Light cues tell a story, the paint treatment of the floor has a meaning, and there is a reason behind the selection or construction of even the smallest prop. By the same token, we realized our actions- the actual praxis of boarding up these buildings- could have multiple meanings. So we quickly centered ourselves on a set of principles to ensure that the meaning that lay beneath our actions aligned with our intentions. Every morning, as we gathered the crews together, we announced these principles aloud to our volunteers, reminding everyone of why we were there:

We also set out guidelines to help us translate these principles into lived action. We prioritized BIPOC owned and operated businesses for help. We recognized that most of our group was white, or at least white-presenting, and made sure we talked openly and regularly about being aware of our presence in mostly BIPOC spaces. We made sure to curtail uses of terms that could be traumatic- we called them drills, not screwguns, we avoided military-style radio lingo. We only boarded up a building when explicitly asked to.
Here again, we relied on our volunteers being designers and technicians. Our crews understood that details told a story. Pre-COVID, it had been their job to build and shape those details, to add those fragments to the greater story. Our volunteers understood that when they were sent to do the very immediate, physical task of boarding up windows and doors, their impact and responsibility extended past the simple completion of the task. The story had to be: “we are here, if you want us, to stand in solidarity with you.”
The skills our careers had inculcated in us transferred incredibly smoothly to our new undertaking. We were receiving hundreds of dollars in donations, and even more in tools and materials. So we got a props designer and artisan; who better to track hundreds of items and thousands of dollars spent and budgeted with speed and precision? We had scores of volunteers that needed to be split into crews, directed and led. In the abstract, it was essentially the same as a giant focus call, a big moving tapestry of time sensitive needs. So we got a master electrician to organize and dispatch our crews. For our crew leads, we took TDs and MEs and so many other artists and artisans, people who knew how to bring together a group of strangers at the top of a call, and get them all working towards a common goal. We had a consistent stream of requests coming in, and a rapidly widening scope. The situation on the ground with regards to the protests was constantly evolving. With so many factors at play, we needed someone who saw the bigger picture, who directed resources according to priority, and who made sure we felt and moved and worked as a team. So we got a production manager.
As the unrest died down, we found ourselves shifting roles. Our systems adapted. We began to build items for homeless encampments, chalkboards for art installations, stages for benefit concerts. We provided technical support for film screenings, we helped take down boards we had put up and fill in screw holes, we archived boards with art on them and took part in community discussions. We’re still doing work now. The work hasn’t ended. It’s a marathon, not a sprint.
As technicians and designers, our job has always been to support and tell stories. We create, guide, and install the myriad of tiny details that push forward and raise up the voices and stories that an audience encounters in the theater. Black Lives Matter isn’t just a statement of belief, a statement of fact, or a statement of intent. It is a three word story, encompassing centuries of violence and oppression, centuries of endurance and fortitude, and centuries of aspirations and hope. In our industry, racism and inequity run deep. The need for education, reflection, and reform is staggering. But fundamentally, our job is to uplift voices. To help tell stories. We have skills that can do this. We need to put them to use.